Bubbly Girl Drink of the Week: The Ginger Snap with Sparkling Sake 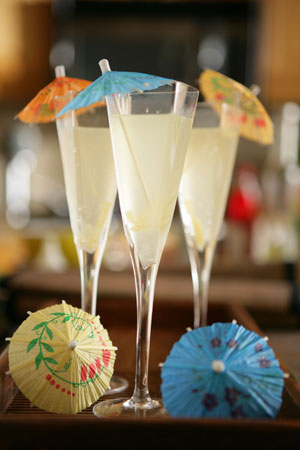 Just like most of us started out drinking cheap beer and sweet pink zinfandel, my early sake experiences were with awful stuff served warm so that I couldn’t tell how bad it was. Fortunately, there’s been something of a sake revolution going on in the U.S. and with events like the San Diego Japan Society’s Sake & Beer Festival on June 25, we’re being exposed to all the elegant and refined junmai ginjo and junmai daiginjo sakes that have all the complexity of a fine wine. (For an excellent and detail discussion of the different styles of sake, be sure to visit this sake tutorial on John Gauntner’s appreciation site Sake World.com.)

But sparkling sake is still something of a mystery to many domestic sake drinkers. It’s relatively new in Japan too, dating back to the 1940s I’m told, as compared to nihonsu or traditional sake, which has been around since 300 BC, according to historians.

How is sparkling sake made?

John at Sake World writes that sparkling sake is made by stopping the rice mash’s fermentation a bit early, while the alcohol is at 5 to 10 to percent. There’s still some sugar left in the mix, which is why sparkling sake often tastes a bit sweeter than still sake. The the brew is bottled and a second fermentation is started to give it its bubbles. Most sparkling sakes are considered junmai sakes, meaning they’re made from just rice polished to 70 percent, water and the koji which starts the fermentation.

Well, that depends on which brand you purchase. I like the creamy crispness, floral and slightly yeasty rice notes of drier sparkling sakes such as Gekkeikan Zipang (About $6) by Sidney Frank Importing or the Trader Joe’s house brand sparkling sake (about $4). Dry sakes are great in cocktails as a foil to sweet, fruity flaovrs. Other sakes like Hana Awaka in the frosty pink bottle, are a bit sweeter and fruitier, designed to appeal to women. A great one to seek out is Hou Hou Shu (about $1o), made from rice that Marumoto grows in an artisanal method and packaged in a pretty sky blue bottle with sparkles. 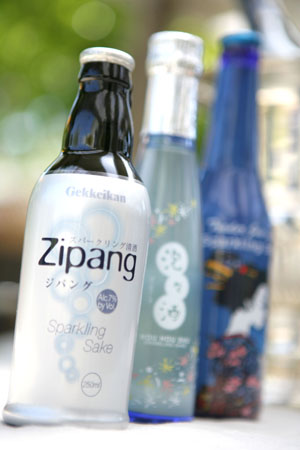 If all this talk of sake has whetted your appetite to taste and learn more, then the Beer and Sake Festival from 6 to 10 p.m. June 25 at Arterra in the San Diego Marriott Del Mar will feature, tasting of over 50 sakes and beers, a Sake 101 class taught by a sake master, the Sushi Masters Competition and food from area restaurants including Zenbu. Tickets ae $60 or $40 for Japan Society members; to purchase visit Japan Society.org.

Or you could go get a bottle of sparkling sake and make a cocktail like this Sparkling Sake Lemonade at the blog Umamimart or a round of Ginger Snap cocktails from my new book The Bubbly Bar: Champagne & Sparkling Wine Cocktails for Every Occasion (Clarkson Potter, August 2009)

Add the ginger and sour mix to a rocks glass and muddle until the ginger is bruised and becomes very fragrant. Strain the ginger and sour mixture into a champagne flute. Top with the ginger liqueur and sparkling sake. Garnish with the candied ginger, and a cocktail umbrella is you’ve got one. To make the Sour Mix, combine one cup sugar and one cup combined fresh lemon and lime juice in a nonreactive pot over low heat. Stir until the sugar is dissolved. Let cool; and pour into a clean bottle. The sour mix can be stored for up to one week in the refrigerator.

The Nutty Persimmon: A Halloween Cocktail in Orange & Black

Punch up Your Next Party: A Sparkling Spring Recipe

Wishing you all a happy International Champagne Da

Started the weekend with a scrumptious surprise: a

So excited to share wisdom from garden gurus @chan

Golden hour, fried chicken edition. So whenever I

It makes me cry to see the devastation happening a

I was watching @da5bloods movie when the news aler

Yeah, I could do this all day. Started at the new