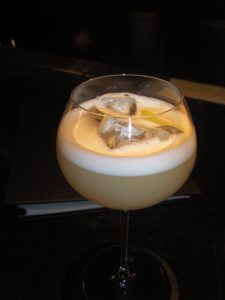 This time of year, most people’s holiday-related thoughts are consumed by Hannukah, Christmas, Kwanzaa and New Year’s Eve. But today, the holiday most serious bartenders and cocktail geeks are celebrating is Repeal Day. December 5, 1933 marked the end of Prohibition, the ill-conceived “Noble Experiment” with temperance that ran from 1919 to 1933.

Repeal Day events are going on tonight at classically-minded bars like The Drawing Room in Chicago. In northern California, check out the party at Elixir in the Mission. In Southern California, head to downtown LA to Seven Grand, The Edison and/or The Varnish.

Before Prohibition, a delicious golden cocktail called the Pisco Punch was the San Francisco treat – sorry Rice-a-Roni. According to David Wondrich’s fine historical cocktail book “Imbibe”, all the bars in town made the this tangy cocktail with the Peruvian grape brandy. Many patrons were prone to over-enjoying Pisco Punch; things got so bad that in 1856, police mandated that people could be served just one of the cocktails per day. 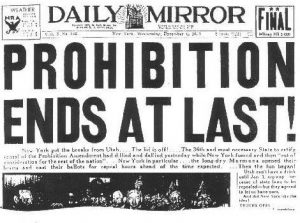 The passage of the 23rd amendment ending Prohibition was front page news across the U.S. (Courtesy photo)

I tasted the Pisco Punch at Quince in Jackson Square last week. A gracious bartender named Ross made me one as a nightcap after a tasty dinner at Cotogna next door.

The original recipe calls for pineapple syrup, fresh lemon and pisco. Ross makes a very local version with Small Hand pineapple gomme syrup and Campo de Encanto Pisco, a very clean and smooth award-winning pisco crafted by Duggan McDonnell of Cantina and partners in Peru. The twist is the addition of egg white that’s been whipped to a frothy perfection.

So stay wet on this Repeal Day by trying out a delicious Pisco Punch — it will be hard to stop at one. Thanks to Wondrich for including a recipe for pineapple syrup in his latest book Punch: The Delights & Dangers of The Flowing Bowl.

Shake in a cocktail shaker filled with ice. Pour contents into a goblet and garnish with lemon twist.

From Quince in San Francisco

Make a rich simple syrup by mixing the sugar and water in saucepan. Bring to a boil, stirring to help the sugar dissolve. Let the syrup cool slightly, add the pineapple chunks and stir. Let sit in the refrigerator overnight. Strain and bottle the syrup, which will keep refrigerated for about a week.

Adapted from “Punch: The Dangers & Delights of the Flowing Bowl” by David Wondrich (Perigee)

The Blacker the Berry, the Sweeter the Cocktail