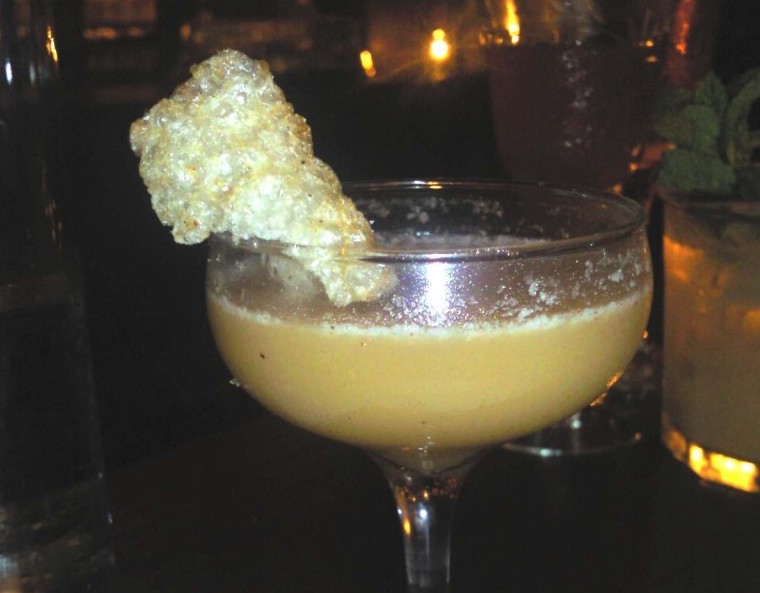 Of all the brown spirits, bourbon is the one I’m warming up to the fastest. I guess it must be the warm flavors of caramel and vanilla and the hint of sweetness from the corn mash that makes it easy to appreciate. I’ve sipped it on the rocks, but love the way it works in cocktails. I’m not the only one apparently: this spring, an organization called Bourbon Women had their coming out party in Kentucky. Founded by Peggy Noe Stevens — the first female master bourbon taster — the group celebrates the heritage of bourbon and educates women about it through tasting events around the country.

I got a personal lesson in the versatility of bourbon this fall when I judged a Four Roses Bourbon cocktail contest at Bourbon & Branch.The Four Roses legend starts with Paul Jones, Jr. who was in love with a local belle. He asked her to marry him and coyly suggested that if her answer was yes, she should wear a corsage of four red roses to the next dance. She did, and the rest is history. These days, Four Roses is admired by connoisseurs for Jim Rutledge’s careful blending five yeast strains and two grain mixes to create 10 distinctive bourbon recipes. Each blend is aged in new white oak barrels, and only Rutledge’s favorite is selected as their Single Barrel bourbon.

For their annual cocktail contest, creative Bay Area mixologists made diverse cocktails with their own corn milk punch, rootbeer and combination of amari and other brown spirits. But in the end, we were most taken with the way the bourbon was enhanced by a combo of bacon, apple cider and a spicy 4505 Meats chicharron in a drink called Autumn Rose by Christina Cabrera.

Add all the ingredients to a cocktail shaker filled with ice. Shake until well-chilled and strain into a coupe style cocktail glass. Now take a bite of the chicharron before sipping the cocktail.

Now Christina’s recipe used maple-bacon-infused honey. Since I didn’t have any of that around, I decided it was time to make some bacon-infused bourbon. This is a simple version of the technique called “fat-washing” that mixologists and chefs use to add the flavor of a fatty food like bacon or foie gras to a spirit.

Basically, all you do is pour the fat released by cooking the bacon into the bourbon, or whatever spirit you’re infusing. Let it sit for a day or two and then freeze it before pouring the bourbon back into the bottle through a cheesecloth or strainer. The bacon fat will have transferred flavor into the spirit.

For a more involved description of fat-washing, check out this post on Blender Booze blog; I also like this profile of fat-washing pioneer Eben Freeman in Food & Wine Magazine.  I learned the lard …er hard way that it’s important to let your bourbon sit in the refrigerator while it’s infusing with the bacon fat. I let it sit on the counter as one recipe suggested and the bacon fat took on a rancid odor, not the sort of thing one wants to drink. I also think the effect works best if you use a more smoky style of bacon.

Real champagne for $20? Mais oui if you’re at Grocery Outlet