The Bubbly Girl’s Drink of the Week: The Siren Bellini at Sé Hotel 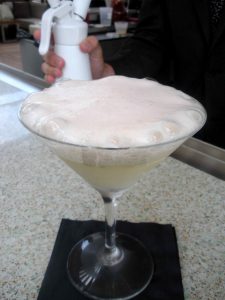 The Siren Bellini at Sé Hotel in San Diego

With its opulent modern decor, the Sé Hotel has set a new standard of for San Diego luxury hotels. And Siren, the newly opened pool bar on the fourth floor, is equally exceptional. There’s the infinity edge pool, the posh party room and the fact that they even allow patrons to sit down in the central Uber lounge or one of the comfy cabañas without forcing them to spring for a $300 bottle of vodka.

But the real difference is on the cocktail list. Siren is the first bar in San Diego to offer molecular cocktails, where science meets mixology. Inspired by experimental chefs like Ferran Adria of El Bulli in Spain and Grant Achatz of Chicago’s Alinea, bartenders are using foams, liquid nitrogen and gelatins to add a new dimension to cocktails.

Being The Bubbly Girl, my favorite was the Siren Bellini. The circa 1948 Venetian prosecco and peach puree drink has been updated by 60 years with a froth of peach puree, peach Schnapps and gelatin shot out of a soda siphon fitted with a CO2 cartridge.

Bar Manager Akop Paronyan pours prosecco in a martini glass and then covers it in a layer of peach foam. The first sip is like drinking a sweet, peach-flavored cloud. After a few minutes the cap settles and the tangy prosecco adds a crisp contrast to the peach flavor.

How Green is My Bubbly: 5 Eco Champagnes & Sparkling Wines for Earth Day

How Green is My Bubbly: 5 Eco Champagnes & Sparkling Wines for Earth Day