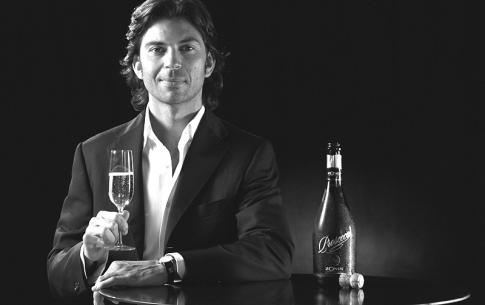 Francesco Zonin is at a loss for words.

Dressed in a dark bespoke suit crafted by a tailor in Naples, the president of Zonin USA is  friendly but reserved, with the bemused air of someone who has been very fortunate in life. During a tasting with friends and writers (including BrokeAss Gourmet Gabi Moskowitz and Morgan First of Second Glass/Wine Riot) on the patio of the former Colosseo in North Beach, the model-handsome scion of one of the most important wine families in Italy seems like he’s used to being master of his universe.

Yet, when I ask him why Prosecco has gotten so popular, Zonin gives that Italian “non lo so” shrug.

“We’ve been trying to figure that out over the past few days,” he says, sipping a glass of their flagship wine. “The answer is we really don’t know.”

“Prosecco is gaining market share from other sparkling wines in Italy,” Zonin says. “And sparkling wine sales are growing in the US.”

If it seems like prosecco is everywhere lately, it’s not your imagination; prosecco sales in the US grew by 50 percent in 2011, according to the Champagne Category Report. It’s estimated that prosecco is on pace to outsell Champagne for the first time ever in the US.

Prosecco 1821 is the flagship wine for Casa Vinicola Zonin.

“We have an idea that depending on the style of wine it’s made with a grape that’s lightly aromatic,” Zonin said. “It’s between brut and extra dry, so it’s refreshing and as with any Italian wine, it is a perfect match with a lot of food.”

He was right about that. Our hosts at Colosseo put out a spread of prosciutto, dry white cheese, salami followed by a first course of fritto misto. The 1821 Prosecco — Zonin’s flagship wine — paired beautifully with all of these foods, gently cutting through the fattiness while lifting the flavors.

This sparkling wine made in Northern Italy is so appealing because it’s easy to drink, without the strong carbonic acid burn that you get while drinking other sparkling wines.

While we call both the wine and the grape prosecco, it’s actually made from the glera grape. The wine is made in a number of places in Northern Italy, like Friuli. The best prosecco comes from around the towns of Conegliano and Valdobiaddene.

I believe so many people enjoy prosecco for the same reason they’ve taken to wines like pinot grigio and gruner veltliner: It’s refreshing, uncomplicated and affordable. Zonin says Italians are discovering the same thing, and rather than treating prosecco as an aperitif, they’re drinking it more than ever, too.

“We needed an excuse to drink it before, but the interesting thing is in Italy, people are starting to have sparkling wine more often,” he says. “The phenomenon (to drink prosecco) during lunch or during dinner is recent.”

Prosecco is also my favorite mixing bubbly of all time; its softer green apple and pear flavors don’t compete with other elements in a drink. In a vintage Bubbly Girl post called La Dolce Vita, I shared five prosecco cocktail recipes using everything from strawberries and limoncello to lavender and honeydew melon. And if you haven’t tried it yet, the Lilikoi Batida, a creamy passion fruit cocktail from the Four Seasons Maui Resort at Wailea, is crazy-good.

The fashion for cocktails made with prosecco makes Zonin smile; the family is the supplier to the Cipriani restaurant Harry’s Bar in Venice, which made the Bellini popular.

Since white peaches are in season, check out this post on Maria’s Good Things, for an easy recipe from the chefs of Zazu Restaurant for Bellini sorbet with sparkling wine.

How to Open a Bottle of Champagne – The Right Way!

The Lava Lamp: Three Easy Holiday Cocktails in One

Got Peaches? Try this “Bellini” Sorbet Recipe from Zazu