Drew Barrymore Has a Wine Brand… But Did You Know She’s a Foodie? 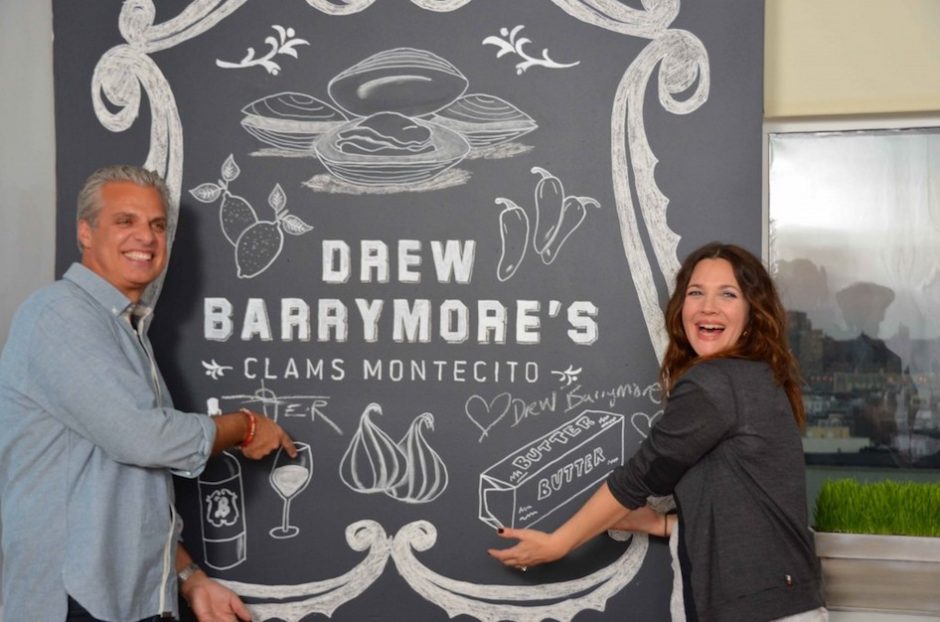 Actress Drew Barrymore is the latest celebrity to go into the kitchen with culinary legend Eric Ripert in his Reserve Channel show and dish on cooking, work and life. – Photo by Eric Damassa

We all know Drew Barrymore as the actress who’s grown up on screen, from E.T. to He’s Just Not That Into You, which also earned her an executive producer credit. But did you know she’s also emerging as a bonafide foodie?

I had the chance to meet the lovely Barrymore, 37, a couple weeks ago when she popped into Pebble Beach Food & Wine festival to talk about her Barrymore Wines and her love of cooking. In case you haven’t tasted it, Barrymore’s pinot grigio is a light and refreshing wine she says is “feminine” sourced from the Tre Veniezie in Italy. But now she’s turning up the heat when it comes to her status as a culinary trend-setter.

In a special webisode that appears today, Barrymore cooks and has a great time cooking and chatting with dreamy French chef Eric Ripert of Le Bernardin restaurant fame. They explore her family history, knife skills and how the shape of the wine glass changes the flavor of a wine. Here’s the link if you want to watch Drew Barrymore in On the Table with Eric Ripert or you can watch it below.

Her dish? Clams Montecito, a buttery mix of clams, garlic, parsley and Barrymore pinot grigio that’s served over crusty French bread. It’s the dish she loves to make when she’s having a girls’ weekend at her estate home in the tony enclave of Montecito near Santa Barbara, where Oprah Winfrey also has a home.  She loves cooking for friends and it really became important when Barrymore and husband Will Kopelman were expecting their daughter, Olive. Keep reading to the end to try her recipe.

Drew Barrymore signs a chalkboard with her recipe in an On the Table With Eric tradition. Photo by Eric Damassa

Drew Barrymore is just one of of the stars that has appeared on the show with Ripert, which is fun to watch because the guests like Roger Waters, supermodel Chrissy Teigen, Tom Colicchio and Elizabeth Olson get to share their thoughts on anything from food to politics to life and goof off a bit too.

This isn’t the first time the actress from a legendary Hollywood family has cooked on air: Drew made an Indian-spiced pasta dish in on The Ellen Degeneres Show and paired it surprisingly with her pinot grigio. And it appears it won’t be the last. When we talked at Pebble Beach, Drew told me she adores cooking shows. And now she’s executive producer through her company Flower Films on the new show called Knife Fight , which debuts on April 23 on the Esquire Channel. In the meantime, here’s her dish Clams Montecito:

Melt butter and add garlic and jalapeño.  Cook for 3-4 minutes on medium heat in a saucepan and add Barrymore Wines Pinot Grigio.  Cook down for about 5 minutes. Remove from stove and squeeze lemon into butter mixture. Set aside.

Turn on grill to medium high and spread clams on cookie sheet and spread around until they open.

Warm butter up if need be and toss onto clams and coat. Serve with warm baguette for an appetizer, or pair with pan-seared cod fish to create an entree.