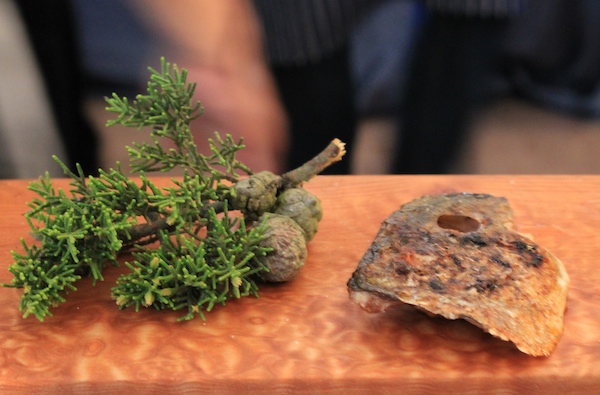 My second visit to Pebble Beach Food & Wine last weekend was amazing; I think it’s now my favorite food and wine festival. I love the fact that it attracts great chefs from all over the country along with some of the best wines in the world. And since it’s in California, it feels a lot more relaxed than Aspen.

During the Grand Tasting, guests have three hours to eat and drink their way through two large tents. The trick is to figure out which chefs are doing the best morsels, and get there early, before the line gets too crazy. Here are the best things we ate:

Cimarusti is a master at seafood of all sorts. A trip to his LA restaurant Providence is well worth it, both for the creative and technically perfect two-star Michelin food and the surprisingly stylish decor. I loved the ethereal ceramic circles that sprouted from the walls like sea anemones. His main dish was a perfectly tender – (perhaps sous vide) striped bass tenderlon paired with pickled enoki mushrooms, carrots and miso mayo. But the fun part was the “Cheek Bar” around the side, where Cimarusti handed out the succulent bass cheeks to guests he liked including Roy Yamaguchi and yours truly.

To me, Cuban-American Chef Douglas Rodriguez will always be the king of Nuevo Latino style food; that mix of Latin American flavors and tropical ingredients. I love, love, love everything in his book Nuevo Latino, it’s the Bible for cooking creative Latin food people will be craving years later. So we got sucked into standing in a long line for his dish, but fortunately it moved quickly. The arepa was sweetly corny and satisfying; the egg added richness while the chicken hash spiced things up. We chatted with the chef and I asked him if he ever took my advice and opened a restaurant on the West Coast. Dougie, I’m sorry but Scottsdale is NOT the West Coast.

Nancy & Matt of Mozza in LA served an out-of-this world burrata caprese with a side of fried bread.

Team Mozza seemed to have had a rough night; the crew including Matt Molina wore baseball caps with the brims pulled down low; Silverton had on these massive round sunglasses  à la Iris Apfel. Platters of lightly roasted cherry tomatoes and mounds of golden bread cubes filled the back work table. Matt scooped out the creamy burrata, another cook added bright pesto and a tomato to each plate. Then Nancy crowned it with the bread and a sprig of basil. Actually, I think the chef should have called this a deconstructed panzanella, since the piece of bread fried in olive oil was what made this dish. Whatevs, it was the most stunning bite of the day. I’ve since become obsessed with homemade pesto – I’ll post my version soon.

Richard Reddington is the other amazing chef in putting Yountville on the culinary  map thanks to his consistently well-executed and striking seasonal cuisine at Redd.  That’s why it’s my favorite place to eat. He’s been been in an Italian state of mind ever since opening Redd-Wood which serves up handmade pastas, upscale wood-fired pizzas, and Italian-esque meaty dishes a couple months ago. If you haven’t been, the cocktails featuring Italian amari and spirits are first-rate and so is the service, led by Nick Dedier, formerly of Ad Hoc. This crunchy outside, creamy saffron rice inside arancini in a nuanced lamb sugo is one of the apps from the Redd-Wood menu. It’s also the kind of thing that makes you want a whole plate of Bolognese.

Not only did Team Mozza create the most delicious savory bite of the day, they also served up the most creative and memorable dessert. Mozza’s Executive Pastry Chef is Dahlia Narvaez, and when my friend Jen — the super-talented designer and artist of Gonzalez Grafica — spotted her name, she rushed over. I’m so glad she did, as I loved the way Narvaez did a mash-up of two favorite Latin desserts: rice pudding and buñuelos. The result was a warm crunchy turnover dusted in cinnamon and sugar with creamy rice pudding inside. A scoop of banana ice cream was added for good measure.

Spanish Shrimp with Bacon, Cheddar and Chive Grits for #letslunch