Skylite Snowballs: An Icy Taste of Baltimore in the East Bay 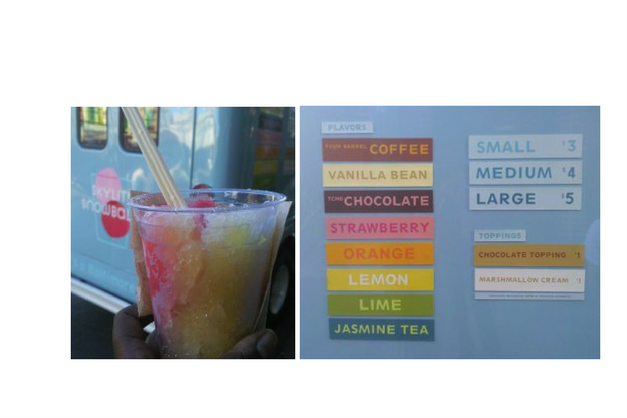 I lived in Baltimore as a kid. And while I’ve indulged in local delicacies like steamed blue crab and crab salad, apparently I missed out on the icy treats that Baltimoreans call snowballs. Until today that is.

I was driving up Piedmont Avenue in North Oakland when I spotted a pale blue truck with a a row of colorful flavored syrups in the window. I parked and then walked up to the truck, just as an excited couple was approaching. They follow @Skylitesnowball on Twitter and were happy to find the truck.

Kate — the cheerful young woman who launched Skylite Snowballs on Labor Day weekend, told me snowballs are always served in a cup, unlike Midwestern snow cones. The ice is grated more finely than a snowc

one, but it’s not as fluffy as Hawaiian shave ice. In Baltimore and around the state of Maryland, snowballs are an old-fashioned treat that’s sold at carnivals and from little shacks.

This article Cold Comfort from City Paper explains that snowballs are sold around the state, often for just a dollar or so. Historians trace them back to the turn of the century, when ice wagons would sell a cup of shaved ice. The most popular flavors there are egg custard, cherry and chocolate, with a dollop of marshmallow creme on top.

Kate’s are different because she makes the flavorings herself, using seasonal fruit like strawberries, and artisanal ingredients like Tcho Chocolate and Four Barrel Coffee. So hers cost $3 to 5 for a basic snowball, plus $1 more for marshmallow or chocolate topping.

I tried one with strawberry and jasmine tea flavorings and liked the way the floral taste of the jasmine mixed with the soft strawberry flavor. The whole effect was kind of mild, so I sprinkled some stevia powder on it at home and it was just right. Next time, I’m having a classic chocolate snowball with marshmallow. If you want to try one, follow Kate @Skylitesnowball on Twitter.

Vodka Salad Dressing and Other 80 Proof Recipes From Finland

Chambord Has a New Look, and a Vodka too