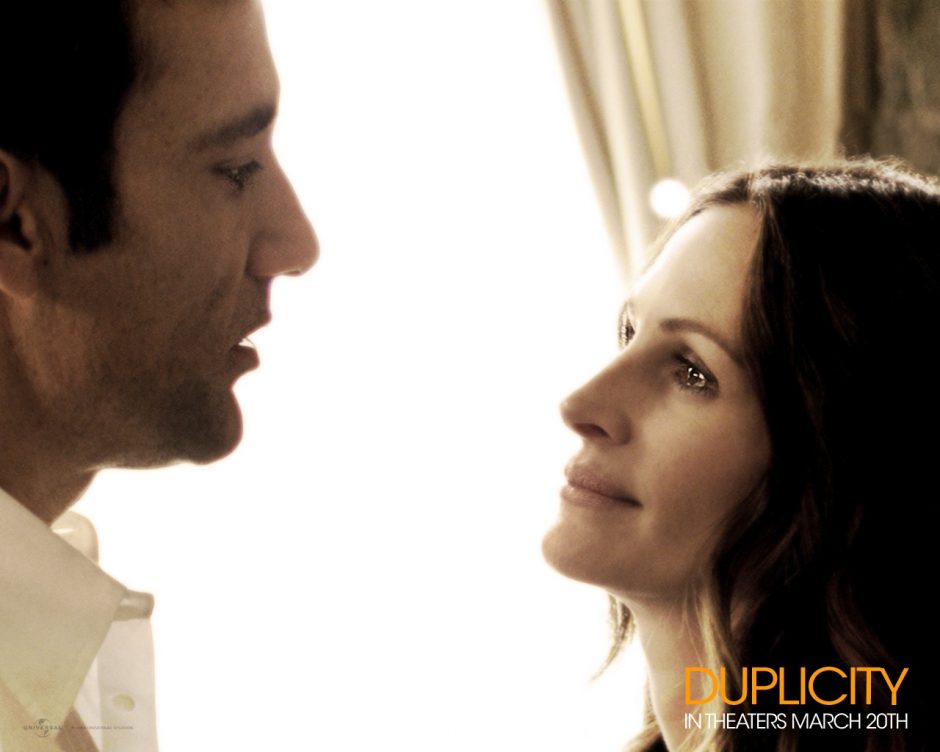 Apparently champagne is the drink of choice among international corporate spies. That’s one of the take-away’s from Duplicity, a new romantic thriller starring Clive Owen and Julia Roberts. They’re former government spies carrying on a secret romance while playing out a high-stakes game of corporate espionage. The pair meets in Dubai, but the romance takes off with an extended tryst in what appears to be a luxury suite at the St. Regis Grand Hotel in Rome (it’s really a space at Convent of Sacred Heart in NYC). The champagne–mostly the bold Moët Grand Vintage Brut and off-dry White Star –keeps flowing in London and Miami, with champagne corks becoming a signal for a rendezvous.

The assertive and distinctive Moët et Chandon Grand Vintage 2000 is one of the champagnes poured in the new film Duplicity.

Duplicity was written and directed by Tom Gilroy, who wore the same two hats on the superb and dark movie Michael Clayton

, also about corporate spying — but with less champagne. Duplicity is fast-paced and fun, with a rising tide of dramatic and romantic tension that at turns reminded me of the films Prizzi’s Honor, The Thomas Crown Affair and The Sting. Even at the dénouement, there’s Dom Pérignon. It’s a lovely piece of product placement, which adds to the plot and underpins the ideal of the glamorous life.

But spies and fine champagne have gone together ever since Ian Fleming created the archetypal international spy James Bond. The literary Bond drank Taittinger, but it hasn’t been featured on-screen since the Blanc de Blancs was sipped in 1963’s From Russia With Love, according to the site Atomic Martinis, which chronicles every ounce of booze consumed in James Bond films. Over the years, the cinematic Bond has been torn between two loves: Bollinger and Dom Pérignon. According to luxury site Bond Lifestyle, Sean Connery turns up his nose when offered Dom ’55 instead of the ’53 in Dr. No.  Roger Moore’s Bond comments that the villain in The Spy Who Loved Me can’t be all that bad if he serves Dom Pérignon ’52. And Moore wishes he had been greeted with a Dom ’62 instead of ’64 when he gets busted sneaking onto the villain’s private island in The Man with the Golden Gun.

In Goldeneye, Pierce Brosnan’s Bond pushes a button on the dashboard of his Aston Martin to open a compartment with a bottle of Bollinger La Grande Année 1988 and two flutes. Daniel Craig, the newest Bond, sips Bollinger in both Casino Royale and Quantum of Solace which is available on DVD March 24.