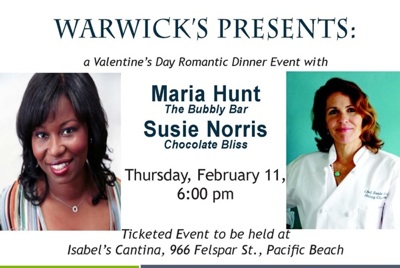 Every year as we approach Valentine’s Day, you hear the word aphrodisiac tossed around. Spanish fly, bananas, potatoes, strawberries, chili peppers – you name it – has been considered an aphrodisiac at one time or another in human history. But this year, I decided to research the foods that have a documented scientific effect on arousal.

Two foods that just happen to have an actual effect on pleasure and libido (the goal of most aphrodisiacs when you get down to it): wine and chocolate!

Come indulge in some of both and pick up some romantic tips on Feb 11 as I team up for a dinner class with LA chocolatier Susie Norris, the author of the hot little book Chocolate Bliss and chef Isabel Cruz of Isabel’s Cantina. I’ll be making cocktails from my book The Bubbly Bar: Champagne & Sparkling Wine Cocktails for Every Occasion (Clarkson Potter, 2009) and sharing a couple new ones for this event; for tickets and info visit www.Warwicks.com.

In case you’re curious about how these foods work to get things heated up; let me share some science. Chocolate causes women to release endorphins, those. In fact a 2007 study at the University of Sussex in Great Britain found women release four times as many endorphins – the body’s natural opiates – after eating chocolate as they do after when making out.

Wine grapes – specifically the skins – contain the antioxidant resveratrol. Researchers at Northwestern University (my alma mater – Go Cats! ) found in a 1997 study that resveratrol – most present in red wines – acts in the body like an estrogen which is a key component in sex drive and arousal.

Wow, just think what will happen after eating those two at the same time!

Even without the science, there’s something tantalizing and romantic about sparkling wine and champagne- another reason why I think these wines should be enjoyed much more often.