I don’t write about beer very often, though technically it is bubbly. But I couldn’t resist when I got this announcement trumpeting the release of Estrella Damm INEDIT, a beer that was crafted under the direction of genius chef Ferran Adria from El Bulli in Spain.

INEDIT is supposed to be served in a wine glass, in order to allow its bouquet to show itself. I do like the curvy, champagne-like bottle and the way the star logo stands out on the black bottle. 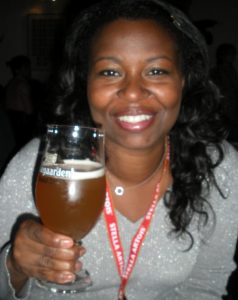 I’m really enjoying this raspberry Hoegaarden while in the town of the same name; sadly this beer isn’t available in the U.S. …. yet.

But get this: the people from the Spanish brewery are touting INEDIT as the first beer designed to go with food. Really? I think all of the brewmasters in Belgium are going to be rather nonplussed and amused by that one. After a short trip to Belgium last fall to experience Stella Artois, Leffe and Hoegaarden in all their different styles, it’s quite clear that to Belgians, beer is it’s own food group. The many styles and weights of beers are expertly paired–just like wine–with everything from appetizers to desserts. One of my favorite pairings was a tangy Kriek cherry lambic beer with an airy Belgian waffle topped in whipped cream!

The extra-ironic part is that INEDIT is made in the style of a Belgian witbier, a white ale made from wheat and spiced with coriander and orange peel. I’m sure it will go with frites, tapas and all kinds of foods just fine.

Once I finally tasted INEDIT, I was delighted with its fragrance and elegance. Sorry, Miller High Life, INEDIT is my new champagne of beers.