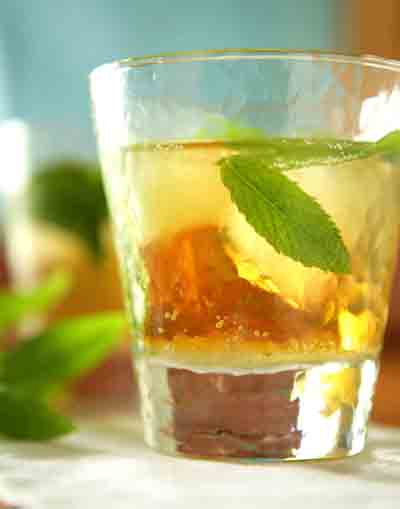 I discovered this recipe for the Champagne Julep while poring over the historic drink book called 173 Pre-Prohibition Cocktails. It’s based on a circa 1917 book called The Ideal Bartender, written by Tom Bullock, an African American bartender who was well-known around St. Louis and Chicago for his Claret Punches, Free Love Cocktails and juleps of all sorts. Bullock was one of the first celebrity mixologists and definitely the first African American one. George Herbert Walker (as in the 41st president’s grandpa) was one of his devoted patrons and so was beer baron August Busch.

Bullock’s julep became part of a scandalous national libel case, when former president Teddy Roosevelt sued a newspaper editor for calling him a drunk unfit to hold another public office. Roosevelt testified under oath that he had only had two alcoholic drinks in his entire life, including a few sips of one of Bullock’s juleps.

Newspaper editorials didn’t buy it, writing that the only part of the drink Roosevelt probably left behind was the ice, the mint and the metal cup. The jury did though, and Teddy won his libel suit.

sprig of mint, for garnish

Bruise the mint leaves by rolling them between your fingers. Add the sugar, bruised mint leaves, and brandy to a rocks glass. Stir to dissolve the sugar. Fill the glass three-quarters full with crushed ice. Pour on the champagne. Garnish with a sprig of mint.

Drink of the Week: The Japanese 75

The Japanese 75 at Alchemy in South Park offers an Asian twist on the classic champagne cocktail the French 75.

When the work week is finally over, what better way to unwind than with a cocktail?!? In honor of Fridays, I’m starting a new Bubbly Girl feature called Drink of the Week.

This week’s cocktail is the Japanese 75, an Asian riff on the classic champagne cocktail the French 75, which stars gin and sour. Frankie Thaheld, who makes super inventive and delicious drinks at George’s at the Cove in La Jolla, created the Japanese 75 for the new South Park neighborhood restaurant called Alchemy.

Frankie’s drink is tart-sweet and fragrant with Plymouth gin; it gets its tang from yuzu juice. In case you hadn’t heard of it,  the yuzu is a fragrant Japanese citrus fruit that’s intensely sour. The juice is available at nearly any Asian market or on Amazon.com; a little bit goes a long way and it also makes a tasty lemonade.

So here’s the full recipe for the Old Style Dry Mai Tai that bartender Lance Krack mixes at Trader Vic’s in the Beverly Hilton.

Besides 2.5 shots of Myers Dark Rum, Krack added a surprise float of Lemon Hart 151 Rum at the end. The Lemon Hart is a smoky and molasses-rich demarara rum that comes from Guyana. In the late 1700s, Mr. Lemon Hart became the first official rum supplier to the British Navy.

For a great discussion of the demarara rum in general and Lemon Hart in particular in Mai Tai Monday at Trader Vic’s Part 2, check out this post by Trader Tiki. 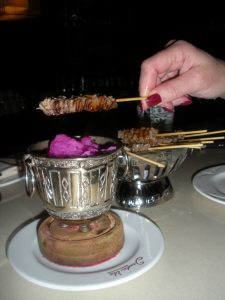 Grilling Beef Cho Cho at your table is part of the fun of visiting Trader Vic’s.

Add lime juice, Mai Tai Mix and dark rum to a cocktail shaker filled with ice. Shake until well chilled. Pour into a rocks class with crushed ice. Drizzle Lemon Hart 151 rum over the top of the drink. Garnish with a cocktail pick with a chunk of pineapple and a stemless maraschino cherry. Add a sprig of mint and serve. 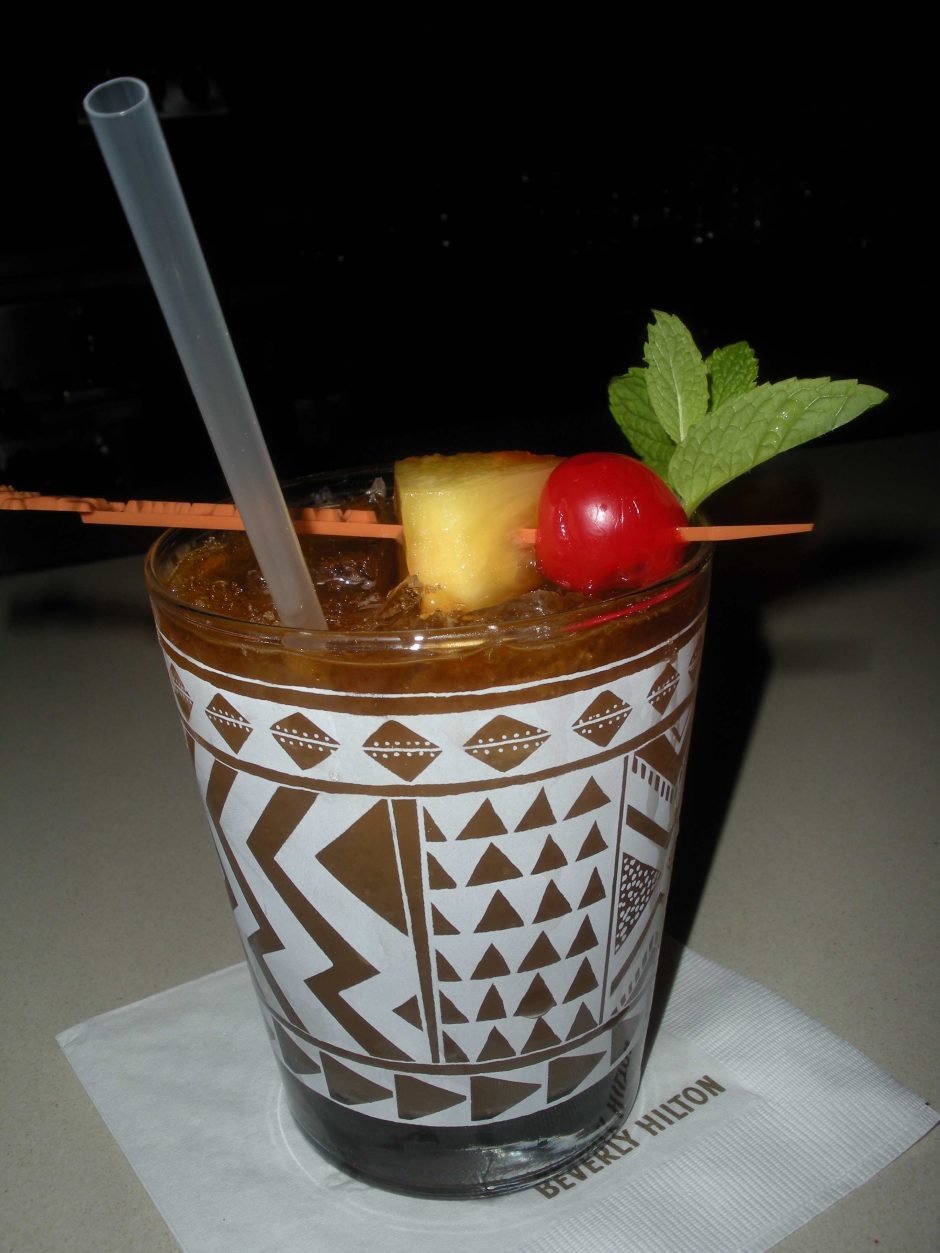 So later that same Monday afternoon I had lunch with the Luscious Ladies at Spago, Lana suggested we go to Trader Vic’s in the Beverly Hilton. Trader Vic’s is her favorite spot as much for the old school menu as the newly done modern tiki decor. The patio, which over looks the pool, features surf movies projected on the wall and beds for reclining, but those had been moved for the Academy Awards party that day.

Trader Vic’s has a very long menu of all kinds of historic Tiki drinks like the Raffles Bar Gin Sling, the Scorpion and the Queen’s Park Swizzle, which our waiter said was way too strong to even consider. But for Lana, the only cocktail to order is the Mai Tai. Victor Bergeron aka Trader Vic created the drink in 1944 at his eponymous restaurant in Oakland. For a great and salty account of how he conceived the original Mai Tai–which means out of this world in Tahitian–check out Bergeron’s story here.

The Trader Vic’s site lists several riffs on the Mai Tai recipe; it was originally a rather bracing rum drink, where juice of a whole lime balanced the orgeat almond syrup, simple syrup (called rock candy syrup in those days), orange Curacao and a 15-year aged rum. Unfortunately over the years many places have turned it into a sweet and fruity concoction that Bergeron himself hopefully would not recognize.

Lana likes her Mai Tais strong and dry with Myer’s Dark Rum. So bartender Lance Krack agreed to show us how in a video of him making a Dry Old Style Mai Tai. Besides the rum, some of the key ingredients include fresh lime juice, Trader Vic’s Mai Tai Mix and crushed ice. Looking for a cocktail umbrella? Fuhgeddaboudit.

Stay tuned for the exact recipe and a surprise in the Part 2 post.