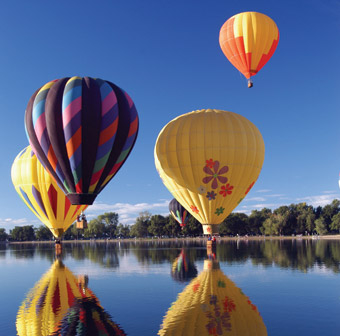 The custom of serving bubbly after a hot air balloon flight dates back to the 18th century.

If you’ve ever been on a hot air balloon flight, at the end of the magnificent journey, you probably enjoyed a glass of sparkling wine or French champagne. But did you ever wonder how the custom of serving bubbly after a flight began?

AshleyMcCredie, a blogger and content coordinator for Cloud 9 Living, an experience gift company, shares the story of how the champagne toast got its start.

“In late July I was lucky enough to have the once-in-a-lifetime type opportunity of a hot air balloon ride. I didnâ€™t know much about hot air ballooning, and one thing that really stuck with me was the story behind the tradition of a champagne toast at the end of each flight.

My pilot, Jeff Meeker of Fair Winds, briefed us on the tradition and history behind the bubbly toast while presenting us all with a split of Korbel, a California sparkling wine. When I came home I wanted to dive more into the facts and story behind this, and hereâ€™s what I found.

In 18th century France, there were educated people living in the city and there were landowners and peasants in the country. People in the rural areas often had little contact and connection to what was going on in the city.

So, picture this, you are a peasant working in the fields and all of the sudden you see this balloon floating through the air with fire coming out of it. Is it an alien? An attacker? For peasants who hadn’t heard of hot air ballooning,Â  the sight of a balloon falling from the sky surprised and often frightened them; especially when they saw the pilotâ€™s face covered in black from ash and soot from the fire keeping the balloon aloft.

To avoid being attacked by the people they surprised, hot air balloon pilots carried Champagne or wine with them as a way to let onlookers know they were human and to thank them for the safe landing in their field.

Today, the toast often goes along with the Balloonistâ€™s Blessing:

The winds have welcomed you with softness

The sun has blessed you with its warm hands

You have flown so high and so well

That God has joined you in your laughter

and set you gently back into the loving arms of mother earth.

Â So, if you do take a flight, hopefully you’ll get to celebrate the experience with a toast and a cold glass of bubbly at the end!”