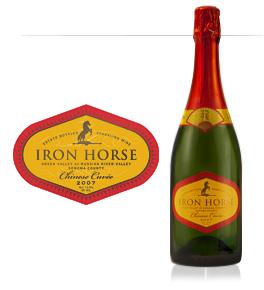 It’s early February, and we’re about two weeks into the Year of the Dragon. According to the Chinese astrological charts, dragons are ambitious and dominant, passionate, creative and prefer to live by their own rules–know anyone like that? Many Chinese families plan to have children this year, because it’s the most auspicious year for a baby to be born.

Iron Horse Vineyards in Sonoma is especially excited about their new Year of the Dragon baby, a very limited bottling called the Chinese Cuvée. Created for export to China, only a lucky in the US few will get to taste this new wine.

Come toast the Year of the Dragon with Iron Horse President Joy Sterling and taste the new cuvée at a dim sum and party from 2 to 5 p.m., Saturday Feb. 11 at Press Club. After the party, head outside to view the Chinese New Year Parade, which dates back to 1860 and is one of the last illuminated Chinese New Year parades. Sponsored by Southwest Airlines, it starts at 5:30 p.m. and passes near Press Club.

Sterling says their winery has a historic connection to China. “The Clintons served Iron Horse at the State Dinner for President Jiang Zemin at the White House in 1997,” she said.

That history led Chinese wine importer Jaguar Wines to approach Iron Horse about making a special cuvée for export to China. The wine’s gold and red label has both English and Chinese and is adorned with a dragon on a fan at the bottle’s neck.

“My family and I are very proud that we have created a top quality American wine that is now an export success story,” Sterling says.

The number 8 is considered especially lucky in Chinese culture, so 8’s were attached to the Chinese Cuvée wherever possible. Of the 1,000 cases made, 880 were shipped to China and the remaining ones are available here in the U.S. The bottle sells for $98 — in numerology, the sum of the digits is 17, which in turn add up to make 8.

The wine is predominantly Pinot Noir from the 2007 vintage. Its dosage — the final mix of wine and sugar added to sparkling wine to determine the level of sweetness–was designed to make it perfect for pairing with soy, chilies and other savory flavors in Chinese cuisine.

“It never ceases to amaze me that four milliliters can so dramatically change a wine,” says Iron Horse Winemaker David Munksgard. “Dosage can affect color, aroma, weight, finish. It is like the seasoning in cooking. We had Chinese cuisine in mind with the Chinese Cuvée.” 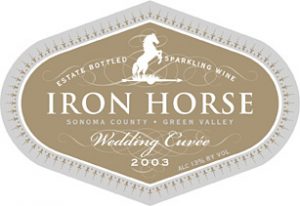 In case you hadn’t noticed, May wedding season is in full bloom.  Champagne and sparkling wine are classic beverages for this celebratory season, but few seem as appropriate as Iron Horse’s Wedding Cuvée.  The peachy pink wine is ideal whether you’re looking for a wedding toast or a sparkling wine to give as a wedding present along with a pair of champagne futes. Crafted from pinot noir grapes with a hint of chardonnay, the Wedding Cuvée has a soft richness to it with a hint of fruit at the end.

Joy Sterling, who runs her family’s winery, says she always loves the moment when she pours Wedding Cuvée at tastings.  “Everywhere I go I meet people who became engaged over it, had it at their wedding, in the delivery room and for anniversaries,” Sterling says.  I like sipping it on its own, but the wine also shines with salmon in a spring preparation with morel mushrooms and wild spring onions. It would also be delicious with lighter pork dishes or this soup made from the wild onions called ramps Epicurious.com.  Sterling says she enjoys it with bittersweet chocolate with a high cocoa content – she swears the combination is like eating chocolate-covered strawberries. 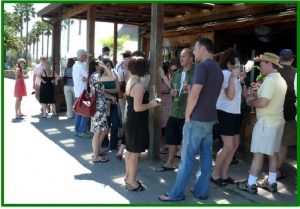 Iron Horse's open air tasting over looking the vineyards is the scene for the new After Hours Friday wine and food pairing. (Photo Ion Horse Vineyards)

If you happen to find yourself with a free Friday afternoon in Sonoma County, then reserve a spot for Iron Horse’s After Hours, a new happy hour with wine and food pairings. It’s available for up to 30 people from 5:30 to 7 p.m. every Friday through October.  To make a reservation, contact tasting room manager Lisa Macek at (707)887-1507 or email her at  lisam@ironhorsevineyards.com.