Krug Champagne commissioned a $500,000 hot air balloon as a symbol of the brand’s image as a luxurious hand-crafted product.

I love champagne. Its effervescence excites me, its crispness makes me smile and its very aura is appealing. I drink it all, from the little grower champagnes to the Grand Dames. No other drink has the same complex creation, the unique history or the emotional impact.

Today on Champagne Day, I’m sharing a piece I wrote a few years ago about the way champagne is marketed to maintain its unique pop culture status.

Clear morning sunlight is just breaking over the distant hills, but I’ve been sipping champagne for an hour, floating in a hot air balloon at 2,500 feet above the Sonoran desert near Phoenix. A white scarf that recalls the magnificent men in their flying machines is draped around my neck.  The silence is broken by the roar of the propane burners that keep the elegant white balloon with its silvery vine logo afloat.

The occasion? Krug Champagne is flossing its unique brand of bespoke luxury in this $500,000 balloon outfitted with hand-tooled white leather, a mid-fight repast created by a French culinary designer and a pilot with a British accent.

Welcome to the new world of luxury champagne marketing. It’s not enough to tout the tastiness of your bubbly in a competitive industry set at just under $6 billion in 2010 according to trade group Comite Interprofesionnel du Vin de Champagne. Whether with cleverly designed bottles and baubles, super-exclusive cuvees or champagne lifestyle experiences, venerable maisons are busy dreaming up ever-more opulent ways to one-up each other and attract attention.

Veuve Clicquot hired ber-designer Karim Rashid to create a curvy pink tÃªte-a-tÃªte style loveseat with an ice bucket built into the center that sold for $10,000. His latest effort is Globalight, a $4,500 limited edition champagne cooler and carrier that keeps your rosÃ© at the ideal temperature while bathing it in soft pink light.

Piper-Heidsieck — which first linked fashion and fizz with a bottle dressed in a Jean Paul Gaultier  red vinyl corset — has dressed RosÃ© Sauvage in a pink and black upside-down bottle by Viktor & Rolf. Last year they released a Christian Louboutin-designed crystal slipper (which also might be idea for Cristal-sipping). This yearâ€™s conceit was a bondage bottle dressed in black fishnets and a mask by Gaultier that cost $285 (at Park Avenue Liquor Shop) if you could even get your hands on one.

Perrier JouÃ«t By and For â€“ a true bespoke bubbly — burst on the scene this spring as the most expensive champagne to date. Celebs Sophie Marceau and Marianne Faithfull have jumped at the chance to be one of the lucky 100 to buy a case for about $98,000. The price includes a trip to Paris for four, â€œpersonalityâ€ champagne blending with the chef de caves, and lunch at the Maison Belle Epoque in Epernay. If thatâ€™s not enough, then consider dropping another $165,000 for the Van Cleef & Arpels anemone flower brooch set with 450 diamonds and 259 yellow sapphires that commemorates the launch.

But by far the most egregious example of the power of marketing is Armand de Brignac champagne, aka Ace of Spades that was introduced by rapper Jay Z. A few years ago, the Cattier family had little success selling champagne for about $64 a bottle in the U.S. Their fortunes changed after Cattier Champagne    — poured into a shiny gold bottle — appeared in the Jay-Z video “Show Me What You Got.” Now it sells for $300 a pop.

Though the flying Krug room takes champagne marketing to new heights, at least there’s a historical precedent. In the late 1700s when the French balloon aviation pioneers took a flight, they always carried a bottle of champagne as a peace offering since the balloon were prone to landing unexpectedly in some poor farmer’s field.

“That’s the same wine in the bottle and the taste has not changed,” said Remi Fritsch-Frontages, Krug’s brand director. “What you create around it that makes people see it with new eyes.”

So what’s next? The Krug Formula One race car? The Krug yacht?  Or maybe they’ll follow the lead of Hermès and launch the Krug Kopter. 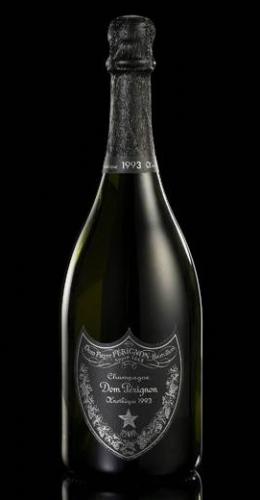 I love pairing champagne and sparkling wines with food, but it’s rare to get a chance to do this with high-end vintage wines and cuisine. Those twin pleasures come together April 22 at the Ivy Hotel in San Diego, when they present a Dom Pérignon champagne dinner in the signature restaurant The Quarter Kitchen.

Three vintages of DP: the 2000, the Oenotheque 1993 and the Rosé Vintage 1998 will be paired with cuisine from Executive Chef Nathan Coulon who uses classic techniques and local seasonal ingredients to create a very balanced and delicious cuisine. The menu includes a Osetra caviar, chilled leek soup with a bacon gastrique and a spring halibut with fava beans, Meyer lemon zest and spring onions in a beurre blanc sauce.

The rarest wine is the Oenotheque  (that’s eno-TEK) 1993. In spectacular vintages, the house puts away wine to age in a special wine cellar known as the Oenotheque, which means wine library. Because of its long aging — 13 years  for the 1993 — the champagne is described as being powerful yet with fruity and mineral notes. 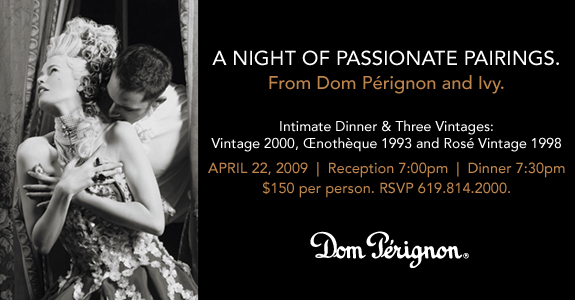 The Ivy Hotel in San Diego is presenting a luxurious Dom Perignon dinner on April 22. Three vintages will be paired with seasonal cuisine by Executive Chef Nathan Coulon.

The Scent of Champagne: 6 Luxury Candles to Go to Your Head 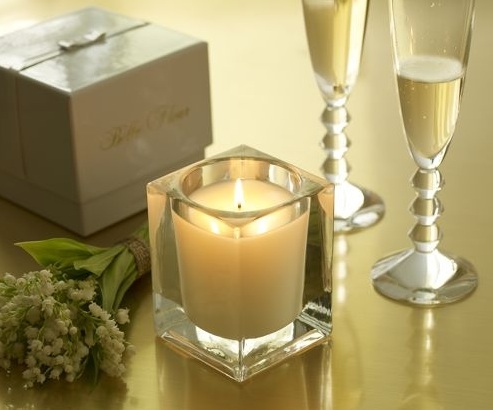 I thought it was just me, since I have a heightened awareness to anything that has to do with champagne. But the latest luxury candle and home fragrance trend is filling the air with the alluring scent of champagne.

The first I noticed was Crisp Champagne by Voluspa, a subtly fresh candle mixed with the scent of ginger and vanilla. It’s pleasant and reasonably priced at around $22 for the full-size, 80-hour candle while votives are just $7. 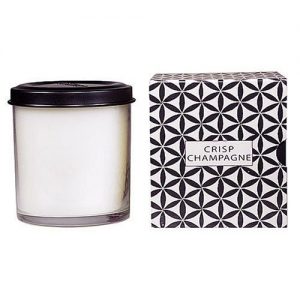 More recently, I discovered the super luxurious Belle Fleur Celebration Candle, shown at top, created by a floral and event designer in NYC. It goes straight for the toasty, bready aromas that greet your nose when you drink champagne, tempered with a hint of lily of the valley. Bready and toasty make me think of being in a bakery, but the owner of the high end candle shop where I discovered the Belle Fleur candle swears it’s worth the $88 price tag.

Looking further, I found the Bubbly Candle by Flare; this clean-burning soy-based candle that sells for about $24 mixes champagne’s scent the grapey, fruity fragrance of Italian muscat grapes (they’re what make the sparkling wine moscato). Neiman Marcus promises to tickle your note with notes of citrus, ginger and raspberry in their Penthouse Champagne candle, offered at $55. And Nordstrom’s is carrying the Antica Farmacista Champagne Candle; it’s a 25-year-old Italian brand recently revived by a couple of savvy American business women. This $38 candle offers an exuberant burst of fruit and flowers including satsuma mandarin, apricot, lily of the valley and passion fruit. 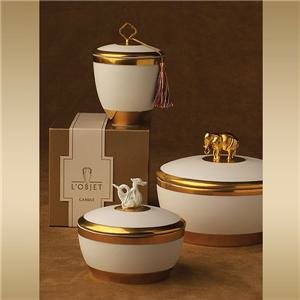 The hip site Unica Home.com is offering the l’objet Pink Champagne Candle that captures the scent of rosé and comes in a white Limoges porcelain vessel edged in 14K gold or platinum and adorned with a tiny figurines like a butterfly, dragon or golden elephant. It’s awfully pretty, but then again, for $85, I might rather be popping the cork on a bottle of Billecart Salmon Brut Rosé Champagne.