Barack and Michelle Obama at the White House Ambassador's Reception on July 27, which featured string quartets, great food and bubbly. (Photo via AP)

Barack and Michelle Obama hosted a glittering reception this week for ambassadors to the U.S. from such far-flung places as Libya, Singapore, Chile and Japan. And what kind of bubbly did they serve to this international set? Turns out it was the Russian Cuvée from Iron Horse Vineyards in Sonoma County.

Besides being a fine example of sparkling wine crafted right here in the US of A, the Russian Cuvée has a history in diplomatic circles. It was the wine served at the historic Reagan-Grobachev Summits that helped end the Cold War in  the late 1980s. The wine is similar to Iron Horse’s crisp Classic Brut, but the Russian Cuvée has a slightly richer and sweeter finish. 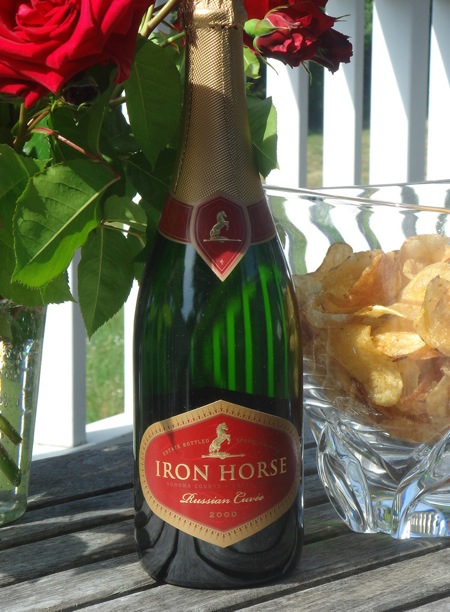 Iron Horse's Russian Cuvée was originally created to be served at the end of the historic Reagan-Gorbachev Summits in the late 1980s. (Photo Courtesy of Iron Horse)

I heartily endorse serving Russian Cuvée – or any great bubbly – with potato chips; it’s a simple and magical combination. But at the White House party they went all out, serving a menu that included Tequila Smoked Salmon on Crisps, Petit Filet Mignon Sandwiches and Leek Tartlets as well as Fruit Cocktails with Whipped Cream and Marshmallows and Blueberry Vanilla Tartlets for dessert, according to a menu posted on the blog Obama Foodarama.