Sex in a Glass: A Sparkling Wine from Michigan

Sex is the titillating name of a rose sparkling wine from Michigan by Larry Mawby.

There are lots of drinks described as sex in a glass: pinot noir; champagne; and there’s even a Sex in a Glass cocktail made of Cointreau, Kahlua and Angostura bitters. But as it happens, Sex is the name of a sparkling wine from Michigan that I tasted recently.

It’s made by a quirky winemaker named Larry Mawby. For the past 10 years, Mawby has made nothing but sparkling wine in the Leelanau Peninsula, in the northern part of the state.

Mawby likes to get people’s attention. His newest wine is a fruity and slightly sweet sparkling wine called Detroit, that blends riesling with the rather obscure grapes traminette and Cayuga. But he’s probably best known for his M.Lawrence range of sparkling wines with titillating, tongue in cheek names like Wet, Fizz and Sex.

He also makes a more “serious” range of méthode champenoise wines under the name L. Mawby. I ordered one of those too — The Talismon. I opened that at a party on the Fourth of July and was very pleasantly surprised. The wine was a delicious balance of citrusy flavors and aromas with toasty ones. It had a nice long finish and the first sip made me want another. I thought it was a of the better domestic sparkling wines I’ve tasted, and for just $30 a bottle. The only thing I found odd about it was the tiny cork – probably the shortest I’ve ever seen on a sparkling wine. 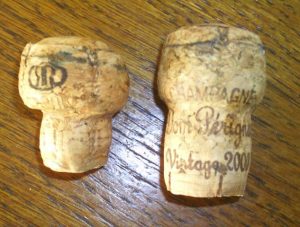 Larry Mawby uses tiny corks on his wines, compared with the size of a Dom Perignon cork at right.

Sex was a different story – a $15 wine with a pretty pink blush color, nice bubbles on the tongue, followed by a hint of indistinct fruit and some distracting musty aromas.

While Talismon and the other L. Mawby wines get their bubbles from a second fermentation in the bottle – just like French champagne – Sex is fermented in a tank. Tank fermentation is a cheaper way to make wine and it’s great for wines like prosecco and moscato which have delicate aromas and flavors that would be lost in a traditional fermentation. But tank fermentation can’t produce a wine of the complexities and nuances of a méthode champenoise wine.

So if you’re looking for a fling with a fun sparkling wine with a racy name, something to eat with pepperoni pizza and barbecue ribs or a gift for a bachelorette party, then Sex might be it.

Like they say, sex is a lot like pizza. Even when it’s bad, it’s still pretty good.