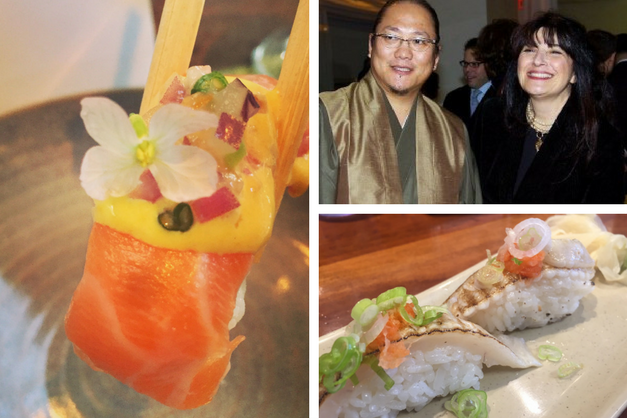 First thing Saturday morning, I drove up to the Culinary Institute of America at Greystone to catch the last day of the Worlds of Flavor Japan Conference. Ruth Reichl was just one of the bold letter names in food in St. Helena Nov. 4 -6. The foodie glitterati also included Thomas Keller of The French Laundry, David Chang of Momofuku, Doug Keane of Cyrus, Masaharu Morimoto of Iron Chef and newish Morimoto Napa and three of the seven Michelin three-star chefs in Kyoto.

Saturday afternoon, Reichl took the stage to reflect on the ways Japanese flavors have influenced American cuisine. She says that for years, Americans pretty much had no concept of what real Japanese food was about – the devotion to seasonal ingredients and achieving an exquisite balance of flavors and textures.

A rare and accurate early account of a trip to a Japanese restaurant was written in 1914 by Clarence Edgar Edwords in his book called Bohemian San Francisco. He describes eating raw fish and enjoying it and even mastering the use of chopsticks.

Up until the 70s, much of the food writing about Japanese cuisine focused on sukiyaki, a winter dish of beef, vegetables and noodles. And Reichl herself caught hell in 1983 for doing her first New York Times food review on a soba noodle place – and giving it three stars. “Never mind that it was an excellent soba noodle parlor,” Reichl added sotto voce.

While other ethnic cuisines took hold because of immigration, that didn’t happen with Japanese foods. Part of the problem is that there wasn’t a good supply of fresh fish needed to make Japanese cuisine in the U.S. But Reichl says things started to change after the Magnuson Stevens Fishery Conservation and Management Act of 1976 that made it profitable for fishermen to invest in boats that could freeze fish at sea and deliver sushi-grade seafood to market. (It also set up many fish populations for over-fishing.)

Sushi restaurants started to open on the West Coast and high-end restaurants of all types started serving raw fish carpaccio, crudo and tartare. Now sushi is found in any supermarket. Reichl thinks the generation who grew up on grab-and-go industrial sushi is now creating the nation’s street food culture. “The sushification of America is now complete,” Reichl said.

This simple combination of soy butter and lime is a great sauce for seafood or poultry and can be dressed up by adding ginger, garlic or even chipotle chile.

We’ve started to get our heads — and mouths — around concepts like umami. But the next frontier in food is texture – and the Japanese know there’s more to it than crunchy. Reichl mused that maybe one day Americans will develop an appreciation for slippery – the texture one finds in natto, okra and yamaimo – the misunderstood mountain potato.

During an interview Reichl did with some years ago with David Bouley, Eric Ripert and Jean-Georges Vongerichten, they all revealed that visiting Japan had the most profound influence on the way they cooked. They gained a greater appreciation for presenting seasonal fare from kaiseki ryori. But they all realized too how sublime simple combinations can be. J-G dubbed soy, butter and lime to be the best sauce in the world and the other chefs agreed.

Here’s how to make it at home: for every tablespoon of butter, mix in 1/2 teaspoon soy sauce over a low-medium flame. When the butter is melted, whisk in one teaspoon of fresh lime juice. The sauce will be a gorgeous caramel color and tastes delicious over seafood or poultry. Once you have the ratio down, it can easily be varied by adding small amounts of fresh ginger root, minced garlic or even chipotle chiles.