Taralli Pugliese: The Perfect Snack with Any Bubbly 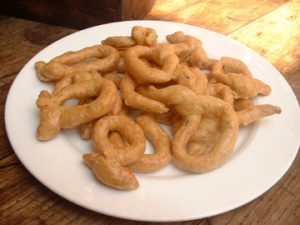 Taralli Pugliese, shown here at Babbo Ristorante in NYC, are crunchy and savory olive oil crackers that shine with bubbly or any kind of wine. (Photo Babbo NYC)

In March I spent a magical week at The Awaiting Table cooking school in Lecce, Puglia, where we cooked and ate  all sorts of wonderful regional dishes from chicken with green olives, thyme and fruity olive oil to handmade orecchiette pasta to simple seafood soup with the sweetest shrimp I’ve ever tasted.

But the Pugliese dish that may be my favorite is one of the simplest: a cracker. Actually, taralli aren’t just any crackers, they’re olive oil based snacks that have been made in Puglia for hundreds of years. They were on the table one night when the class went out to a wine bar that served all the regional wines like primitivo di Manduria, Nero di Troia and negroamaro along with the oddest assortment of country music and Beatles songs. A new friend Carolyn served them to me one evening as we sipped a brut sparkling wine from the Salento.

Whether they’re plain, seasoned with red pepper or fennel, all have a nice crunch, a crumbly texture and a satisfying flavor from all that good Italian olive oil. I was serendipitously surprised when a quick Google search turned up a recipe for taralli from Gina dePalma, the pastry chef at the Mario Batali restaurant Babbo in New York City. Here’s her recipe for Taralli al Peperoncino flavored with red chile flakes and oregano. They’re crafted from low gluten 00 flour, shaped by hand, boiled and then baked like a bagel. The spicy ones are popular, but dePalma also suggests flavoring them with crushed fennel seed and lemon zest. 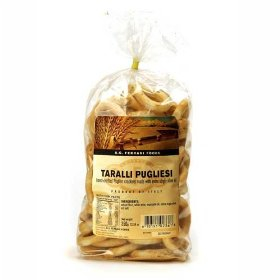 Taralli from A.G. Ferrari on Amazon.com.

If making them from scratch sounds like too much work, then pick some up at your local Italian gourmet shop or  order them from  A.G. Ferrari on Amazon.com. But there’s no way they’ll be as fresh as homemade.