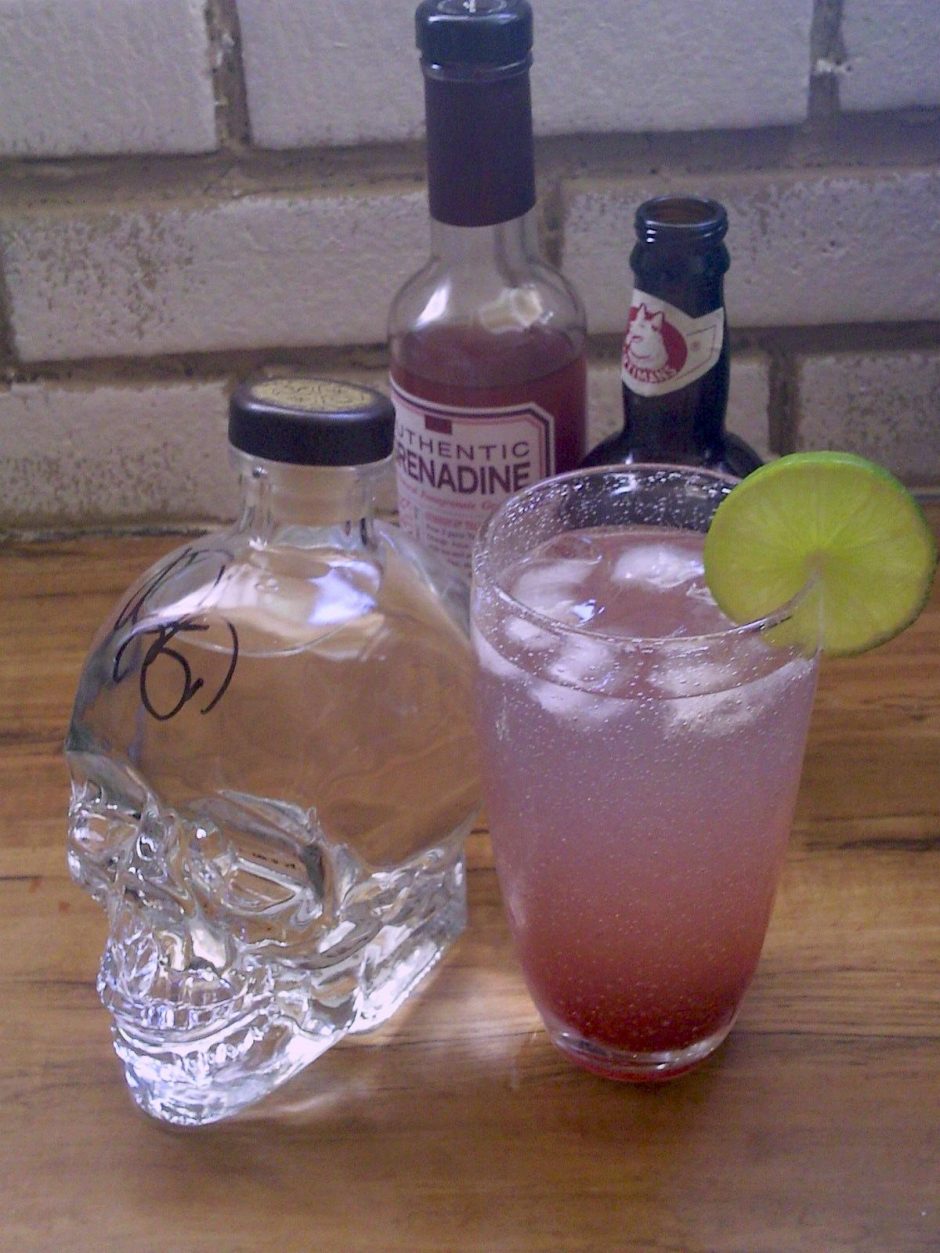 When my friend Laura sent me a bottle of the Crystal Head Vodka in the distinctive skull-shaped bottle, I knew it would be perfect for a Halloween cocktail shoot. Since it was released, I’ve seen some tequilas in painted Day of the Dead-style calavera bottles. But they look dowdy next to this perfectly clear gleaming skull.

The Moscow Mule is the only vodka cocktail I drink regularly. It’s like a gingery mojito and it’s super simple to make, since there’s absolutely no muddling involved.

The story goes that the Moscow Mule was created back in 1941 for a promotion by the Smirnoff Company to help market their new vodka. The recipe was released along with special copper-colored mugs.

Holding the cold, sweaty mug in your hand adds to the refreshing experience of the drink. But to see the bloody effect I created by swapping the simple syrup in the recipe for the pomegranate syrup known as grenadine,  you’ll want to make this cocktail in a clear glass.

By the way, that’s not a stain on the front of the cranium, that’s a signature from actor, bluesman and entrepreneur Dan Akroyd who owns the brand! (Off topic, but if you’ve never seen Akroyd in ’80s movies The Blues Brothers or Trading Places–which has a great Halloween story line– go check them out on Amazon. )

Pour the grenadine into the bottom of your cocktail glass. Fill the glass three-quarters with ice, add vodka and lime juice. Stir gently to combine. Top with ginger beer and stir. Garnish with mint sprig and lime slice.
Makes 1 cocktail

Raspberries, Chambord and a splash of cream make for a deliciously dreamy cocktail sure to please any Valentine..

It’s that season when people start thinking about red and pink drinks — the two staple colors of Valentine’s season entertaining. I love working with red fruits like raspberries because the color is so inviting and the sweet-tart berries add such a bright flavor.

I was thinking about a grown-up raspberry milkshake when I came up with this Raspberry Dream cocktail that mixes the fruit with the black raspberry liqueur Chambord, vanilla-infused vodka and a splash of half-and-half.

If you need another reason besides deliciousness to drink your raspberries, it turns out they’re really good for you. Raspberries are high in ellagic acid which helps prevent free radical damage and the flavonoid compounds quercetin and kaempferol, which play a role in fighting a number of diseases, according to World’s Healthiest Foods. Black raspberries may help ward off colon cancer, according to this study from the University of Illinois at Chicago reported on Science Daily.com.

Sounds good to me!

Muddle the raspberries in a cocktail shaker glass. Add the half-and-half, Chambord,
simple syrup, vodka and ice. Shake until well-chilled. Strain into a martini glass. Garnish
with a raspberry.

Note: Making your own vanilla vodka is easy, just slit a vanilla bean, slide it into your favorite vodka and wait a few days.
© The Bubbly Girl, 2011

Sweet Liberty was inspired by the red lemonade served for Juneteenth, the celebration of the day that news of the Emancipation Proclamation reached slaves in Galveston, Texas. It’s red and blue color scheme also makes it a natural for the Fourth of July.

Put raspberries, lemon and sugar to the bottom of a tall glass. Using a muddler, smash the fruit to release its juices. Add vodka and stir. Fill glass three-quarters with ice. Top off with sparkling wine. Add sparkling wine. Tuck ends of the lemon twist inside the raspberry and thread onto a cocktail pick.

© By Maria C. Hunt, author of The Bubbly Bar: Champagne and Sparkling Wine Cocktails for Every Occasion Published August 2009 by Clarkson Potter, a division of Random House

The bright orange hue of this cocktail comes from the combination of the Italian aperitif Aperol and guava nectar. I like it with sekt, the light sparkling wine that comes from Germany. It would be fine before dinner though it would also be quite tasty with for brunch, if you can rationalize it.

Add guava nectar, Aperol, vodka and lemon juice to a cocktail shaker filled with ice. Shake until well chilled; strain into a martini glass. Top off with sekt. Garnish with a lemon peel.

© By Maria C. Hunt, author of The Bubbly Bar: Champagne and Sparkling Wine Cocktails for Every Occasion Published August 2009 by Clarkson Potter, a division of Random House

With so many antioxidants, organic spirits and wine from organically grown grapes, this custom cocktail I created for Alicia Silverstone’s Kind Diet book signing in San Diego is practically a health tonic!

Add the chiled pomegranate blend juice and vodka or soju to  wine glass or champagne flute. Top with the chilld prosecco. Garnish with edible flowers like orchids, daisies, rose petals or pansies.

By Maria Hunt aka The Bubbly Girl, author of The Bubbly Bar: Champagne & Sparkling Wine Cocktails for Every Occasion (Clarkson Potter, $16.99)